It’s so very hard to think of that day. Even now, almost five years later, we still celebrate our daughter Ada’s birthday the weekend after, because we can’t pull ourselves into a party mode on that particular date.

Ada’s birth accident was like a train hitting us at full speed. It brought us to pieces. From that moment on, everything we knew about ourselves became obsolete, nothing would ever be the same.

My pregnancy was perfect, I had never felt so good in my entire life. A baby after 15 years of marriage, it was the utmost blessing. My husband and I immigrated to Canada the year we got married, and we had to rebuild our life from scratch. It wasn’t easy, but we had finally managed to reinvent ourselves and be happy.

As I was 40, my doctor agreed to induce the birth. I was given an appointment for June 24th. As they prepped me, they noticed that the baby’s heart was beating slower than normal, so they rushed me for an emergency C-section. When the baby came out, her heart had already stopped beating. They began resuscitation, but unfortunately it took too long to bring her back: nine minutes without oxygen. The consequences were terrible: motor impairment, hearing loss, lack of 3D vision, epilepsy, eating difficulties, and some problems affecting cognition.

I had to wait almost a whole week before I was finally allowed to take her into my arms. She was plugged to many machines which made it impossible to hold her properly, but the moment was still magical.

Every day, we experience the pain of watching our daughter struggle in so many areas. We don’t know what her future holds, but it’s reassuring to know that the MAB-Mackay will be there for her. 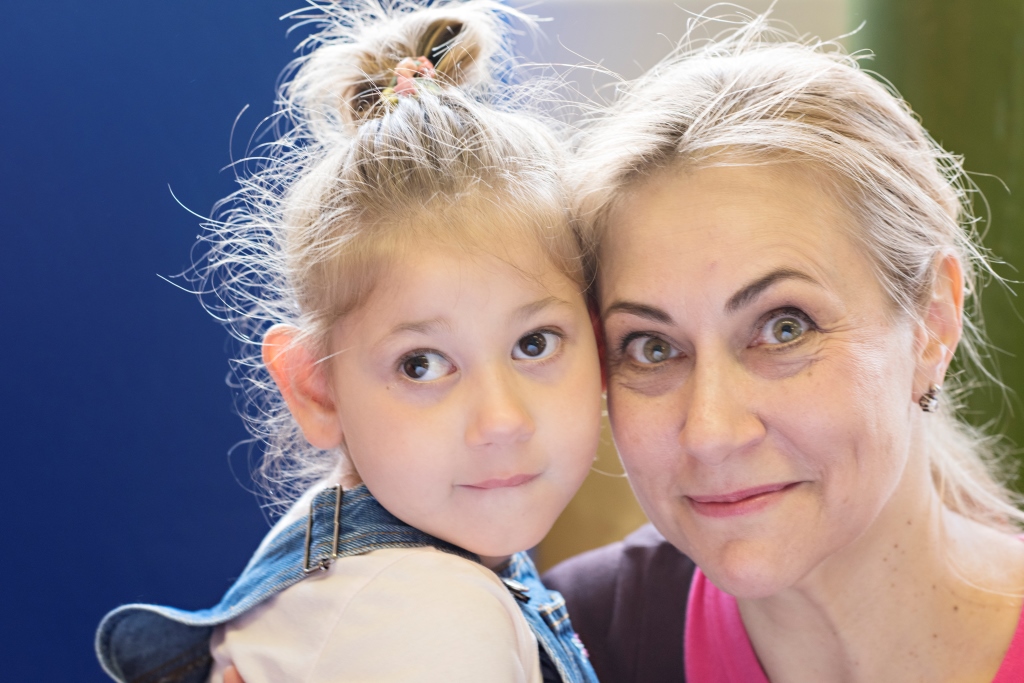 It was almost a year later that we first started to receive services from the MAB-Mackay. We were still in denial, believing that Ada would outgrow her condition sooner or later, so we were really nervous. From the very beginning, we found the care fantastic – open, friendly and comforting.

Ada has a complete program of therapies at the MAB-Mackay, including physiotherapy to support her mobility and function; occupational therapy to improve her motor and sensory processing skills; speech therapy so she’s able to communicate; and audiology for her hearing aids. They’ve also provided Ada with a standing frame, an adapted bicycle, as well as many adapted toys to promote her skills development at home between sessions.

Most of Ada’s developmental achievements happened at the MAB-Mackay. I’ll never forget how I felt when she took her first steps by herself at four and half years old. Up until then, Ada would take a few steps during her therapy, and quickly lose her balance and fall if not supported.

Then, just a week before Christmas last year, after Ada’s physiotherapy session, she started walking along the corridor – just because she felt like it.

It took me by complete surprise. I was jumping for joy inside, and also scared to death that she might fall on the hard floor. But her physiotherapist Sara reassured me that Ada was ready. When I called my husband to share the news, he started to cry. So we had a Christmas full of promise, although a very difficult one, like all the others since Ada’s birth. We can’t really enjoy the holidays because we haven’t yet found that inner peace that one needs to be happy.

The team at the MAB-Mackay supports us in so many ways that I could fill up several pages. It’s enough to say that nobody knows and understands Ada better, neither her doctor, nor the staff at the daycare, nor our family or our friends. They always go above and beyond “doing their job.” They work with their heart and soul, and one should know that every session takes them a lot of physical and mental energy.

None of this would have been possible without you!

Ada turns five later this month. Most kids her age will be starting kindergarten in the fall. It’s reassuring to know that the MAB-Mackay will be there to assist Ada through this important step. Even opening a lunchbox or getting around the school will be a challenge for Ada. Her team is committed to helping us find the perfect school environment to support her needs. They’re also preparing us as parents with the tools and knowledge to face the challenges of raising Ada.

The generosity of the foundation’s supporters gives so many families like ours hope. After Ada was born, I had to leave my job to take care of her and bring her to her countless medical appointments and therapies. It’s been hard to keep up with friends, and all of our family is in Europe. Other than my husband and myself, we realize that the staff at the MAB-Mackay are the people who are closest to Ada.

You’re giving Ada a better future, and the tools to reach her full potential. For this, we are deeply grateful.